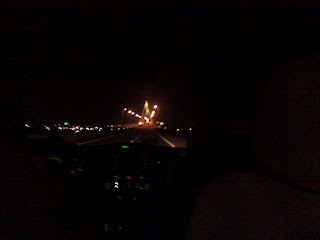 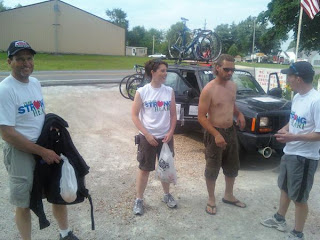 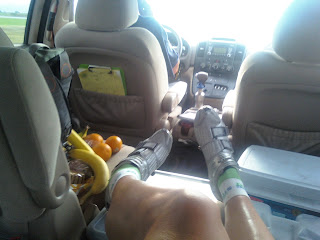 Another morning still on the road in Kansas (6/24)
RAAM Learderboard
Team Strong Heart Progress Map
Update 10:37PM CDT: Team Strong Heart just reached TS#34 and passed over the Mississippi River! They will be racing through Illinois overnight. By morning we should find them in Indiana. Stand by for more racing action, the miles are ticking down now!
Update 10:30PM CDT: Sorry for the long gap in updates. I ended up being away from the computer for many hours and I locked out fill-in guy Neil by accident. Back to race action...
Team Strong Heart is now now approaching the Mississippi River and TS#34! Current conditions in St. Louis, MO: 85F with a 73F dew point and no wind, YUK! I think all the racers are sick of the sticky heat...
TSH is currently leading the field after several hours of neck-and-neck racing with Team Surfing USA. We have now learned that an unfortunate incident has taken Team Surfing USA out of the competition.
I am uncertain as to what actually happened and reports have been vague. I do know that nobody has suffered any life threatening injuries. It sounds like possibly a broken ankle was suffered by the Team Surfing USA rider involved.
I'm sure I share the same feeling as all of you RAAM fans and I'm very sorry to hear of this. The competition was good and it made for great action!
Update 11:34AM CDT: Wow! at the last time station (Camdenton, MO) that TSH passed through minites ago the gap between them and Team Surfing USA was 3 minutes. It is amazing that after 1853 miles and 91 hours of racing these two teams are so close. Stay tuned as the cat & mouse game continues. There is still a lot of racing left and anything could happen! Good luck to both teams!
Update 10AM CDT: Andy just checked in via cell phone. Spirits are high and things are going well. He reported that as they pulled into the last time station they encountered Team Surfing USA's complete vehicle support fueling up. IF all their vehicles are there, that means their riders are very close too. And wait... checking the leaderboard it appears Team Surfing USA pulled into the last time station only 4 minutes ahead of Team Strong Heart. That means TSH narrowed the gap by about 20 minutes over the last time station leg alone!!
Update 9:45AM CDT: TSH has reach Missouri and TS#30 at Weaubleau, MO. Madonna has now joined up with the TSH. She will be the sole female on the crew living out of an RV for the balance of the race with a bunch of stinky guys. Good luck to Madonna!
Current weather consditions: 85F, light winds from the SE, and a steamy dew point of 72F. There is also a chance of thunderstorms in the forecast.
Last year it was in Missouri were the 08 Team Strong Heart encounterd this scene.
Update 9AM CDT: The RAAM Solo Competition is worth a mention. The race for the lead is virtually a tie right now. Jure Robic who has been dominant the past few years is being seriously challenged by the German Dani Wyss. Robic has not had this kind of pressure over the last few years.
Minnesotan Ben Popp has also been very impressive as he continues to hold his spot on the leaderboard.
Check out the soloist leaderboard here.
Update 8AM CDT: Team Strong Heart is now approaching the Missouri state line. I'm sure like every other team they will be happy to put Kansas behind them. The gap between TSH and Team Surfing USA continues to shrink. At last check there were only 25 minutes between them as they pasted through TS#29 in Fort Scott, KS.
Andy check in via cell phone about 11:45PM last night. They were in El Dorado, KS and had just finished a shift. He was calling from a Walmart while shopping for re-supplies. He reported the teams are feeling the heat!
The states will start to zip by now as they move east. By days end today they should reach the Mississippi River. Today is the day that they also gain a fresh crew member. Madonna Lindgren joins the team at one of the first time stations in Missouri. She has a hotel room waiting with a real shower for when the team arrives. A few lucky team members will get to clean up!
Posted by JayT

Can you smell the sea of the Atlantic and the taste of victory?
Keep shrinking that time between you and Surf. Dig deep and push.
Tim has told us what an amazing team & crew is doing this feat.

Uncle Bill said.....
At last! A woman to keep all that testosterone in check!! Glad to hear Madonna is joining you she will no doubt add vital positive energy to the crew as well as that all important female perspective to the race.
Your progress is amazing gents, may rough roads, flat tires, fatigue and malaise keep all the other crews, especially those "SurferUsa boys...." well behind you guys and let you shine on in the lead for the rest of the race.....
As always keep up the good work, godspeed to you all, many thanks to the wonderful hard working and fantastic support crew, remember, listen to madonna now....lol...
As always, May Allah watch over you and bring wings to your feet and protect you all.
Thanks for the progress notes..
Uncle Bill

Go get'em TSH!!! The tide is high...and it's time to ride out the surfers! So proud of you all!!! Best wishes to your amazing crew & kudos to Madonna for bringing some gal power to TSH :-)!

Rock on TSH! If all goes well and you guys haven't blown by the predicted times then we will see you at TS #48, if we miss you then you are doing better than RAAM thought you could which is even better! Keep Team RANS in your sights, they aren't out of reach!

To whoever is getting these words to the crew and racers in TSH let me say that no peddle stroke is being missed here and I wish I were there! And I can't wait till you are here again!
Your placing is good and increasing! I am following all of the fields and you are doing an amazing job. Once again, would that I were there.
A final word from the old Crew Chief: keep an eye on the rulebook! Robic has picked up 1 HOUR of penalties and is in danger of taking 2nd place because of it! and I cannot wait to hear the details of why Team Surfing USA has DNF'd so far into the race (45 minutes of penalties????)
This recommendation falls much more instensely on the crew than the racers! The errors in the race are almost always a slip due to eagerness to perform and fatigue, and your job is to get your team across the country!
You're ALL DOING GREAT!

And once again my words to Madonna and Tim and Andrew: if you or anyone there needs anything - ANYTHING - you have my cell number!!!