10:43PM-CDT: Amy has made it to Pratt, KS and TS#26.  Conditions at the time: 69F, mostly cloudy with some rain in the area, and NE winds at 5mph.  I'm not certain, but I think this is were Amy will take another sleep break. 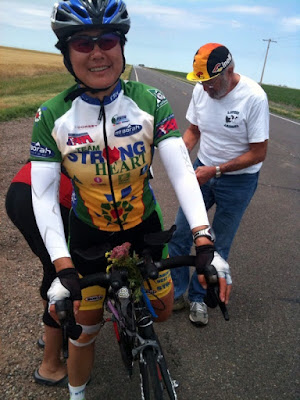 Amy Xu just outside Montezuma, KS. RAAM 2010
2:00PM-CDT: A few more photo's courtesy of Amy's crew.  Report is she is about an hour away from TS#24 at Montezuma, KS.  It is 72F and she working against a cross/head wind out of the NE. 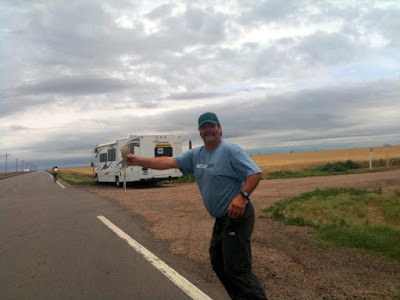 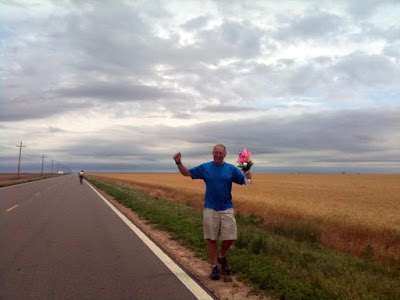 Tim cheering Amy on as she pedals through Kansas.  RAAM 2010 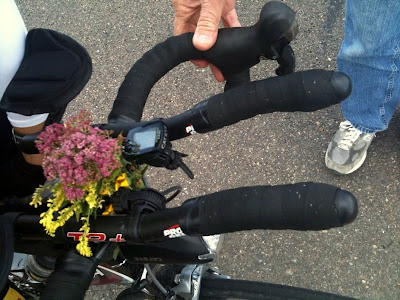 12:00PM-CDT: Another photo update! Thanks Sally! 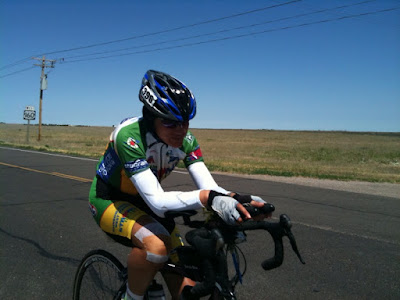 Amy got hot food 7 miles out of Ulysses, she had a championship breakfast, including raman noodle, hot chocolate, pancake and sausage.  She took 20mins catnap. David adjusted her seat, the seat Michelle and David made for her took her pain away.  She likes it very much.  Will get a pic of the seat later.  She looks great!  -Sally
10:26AM-CDT: Amy has now reached TS#23 in Ulysses, KS.  She is over 1300 miles into the race!  Conditions in Ulysses at the time was 62F with scattered clouds and NNW winds at 16mph. 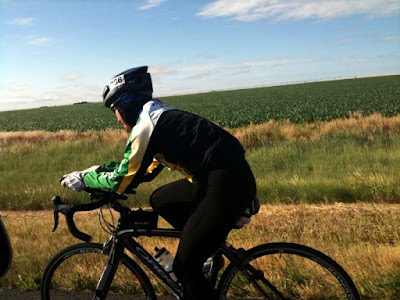 6:04AM-CDT: Amy has now passed through TS#22 in Walsh, CO.  This is the last Time Station in Colorado! Amy is now heading to the plains of Kansas!  Conditions in Walsh were 46F and calm.

keep on RoCkInG!
We are thinking of you guys and sending positive thoughts and prayers your way!

kansas already??! the mountains are behind! way to RIDE!! pedal, smile, and keep your chin up, you're going to finish great! :)

Keep going Amy - you can do it! You are in my thoughts all the time - I admire your determination!

Great job Amy - welcome to the flatlands! You will be Queen of the Prairie for sure.

You are amazing. After conquering the Rockies, you must be one of the first people who truly appreciate that Kansas is flat. We are cheering for you!
Stuart

Fantastic Amy! I know you can do this. If you can, absorb the energy of the beautiful scenery you're experiencing and use it to pull you through in those tough moments.

Great job Amy! I can hardly wait to hear that "you're not in Kansas any more!"

Amy, you are amazing! You have incredible inner strength.
Leanne

Hi Amy,
This is Lark we sat next to each other at the crew meeting in Sacramento and said hello with a big hug at the start before my team started for RAW. You are doing awesome and so is your crew. I am following you all the way and am so proud of what you are doing. Best to you Amy. Lark

Go Amy!!! You continue to amaze us.

Glad to hear you made it out of Colorado. I hope kanasas will treat you nicer. Hey Have we ever told you about our friends daughter Ellie? Ellie was born a little over a year ago with 2 holes in her heart she will need surgery about every 2 years as she grows to repair them. Thanks to you and team strong heart she will grow up looking forward to going to camp with kids like her. Keep up the hard work you are doing great!

Kansas already? I was maybe a little different but I really liked Kansas.
You're looking really "Good" in all the photo's! Keep on smiling!

Aloha Amy,
Cheryl and I are fixated on your incredible journey. We read about you daily and continue to be amazed to see you still smiling. Your optimistic spirit and fierce determination are true testimony of ability to your "bike ride of a life time". Remember to come to RELAX with us in Hawaii real soon!
Cheers!
Melody and Cheryl

I emailed one song to both your email address and Sally's email address. This song gave me "power" before ( though not the horse power)^^ I like both the words and the melody. If you want to hear the song, ask Sally to play for you. Hope you like it,too.

Take care and be safe!