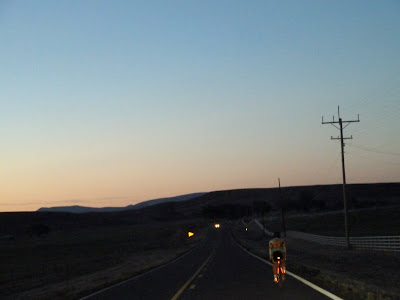 Off into the twilight, RAAM 2010
11:00PM-CDT: Just got a text-message update from Amy's current road crew.  They reported she is about 35 miles from Kayante, AZ (TS#11).  They said she is flying riding along at about 17mph!  Amy will see temps down into the 50F's as she rides into Utah overnight.  Winds continue to be from the SW at 10-15mph.  Guests are reported up to 30mph.
8:36PM-CDT: Amy has passed through TS#10 at Tuba City, AZ.  At the time the temp was 71F with WSW winds at 13mph.  Less than 100 miles of Arizona left, then she crosses into Utah.  She will race through about 100 miles of Utah before crossing into Colorado.
All the riders will be happy to leave Arizona.  According to RAAM the section between Cottonwood, AZ (TS#8) to Flagstaff, AZ (TS#9) averages more than 128 feet of climbing per mile.  They say it is the toughest section west of the Mississippi River!  That's behind you Amy! GOOD WORK! 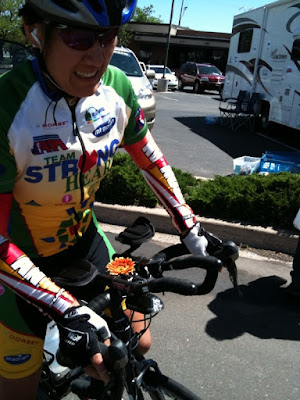 Amy leaving Flagstaff for another shift on the bike.
4:30PM-CDT: After a good sleep Amy is back on the road!  Reports are she is still feeling good.  The temp was 61F wind a south wind at 10mph as she left Flagstaff


12:18PM-CDT: Amy has reached Flagstaff, AZ TS#9!! Skies are clear, the temp is 64F, and the wind is out of the SW at 22mph.  Report is that Amy is very tired.  Her last effort lasted approximately 24 hours!  She is now scheduled for a sleep rest.  During that time she will eat a meal (pancakes!), receive message therapy and fluids via IV if required (very likely), and SLEEP!!.  Also, during this time her crew will analyse her current situation and formulate a plan for the next step.  Amy has a very qualified support crew and she will be in the best care. 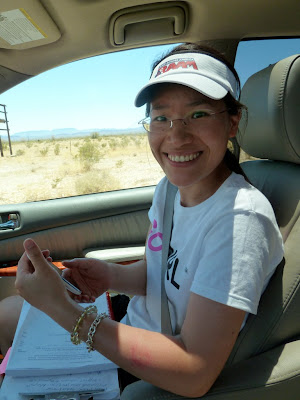 Sally in the Navigator seat. RAAM 2010

9:00AM-CDT: Amy's current support crew just checked in via text-message and reported that they had just passed through the city of Sedona, AZ.  The leg from Sedona to TS#9 in Flagstaff is about 30 miles, it has a substantial amount of climbing with about 2500 feet of gain.  This will be challenging for Amy as she has been up and riding for the past 9+ hours.  By the time she reaches Flagstaff she will have been on the bike for about 12 hours, ridden over 250 miles, and climbed over 8600 feet!!


6:35AM-CDT: TS#8 in Cottonwood, AZ has been reached.  The temp was 67F with SSE winds at 6mph.  Next up is the 53 mile trip to Flagstaff and TS#9.  Amy is heading to another scheduled rest stop and she'll have earned when she gets there.  There is nearly 3500 feet of climbing to get to Flagstaff!  The crew reports she is tired but hanging in there.  GO AMY!

Meanwhile, the lead male soloists, who started 24 hours after the women, have already passed TS#5 in Salome, AZ.  Jure Robic, 4-time RAAM Champion is in the lead.

1:47AM-CDT: Amy passed through Time Station #7 in Prescott, AZ.  Conditions at the time was 70F with south winds at 6mph.
Posted by JayT

Thanks to Mr. Beckman's classes kind messages! Those have been relayed to Amy vis text-message. She's at the end of a hard ride and is feeling it. A scheduled rest is coming shortly.

Mr. Beckman's 4th hour class says,
Pedal to the metal! Keep going Amy you can do it!

Mr. Beckman's 5th hour class says, You are awesome! Keep going! You can do it! Go for it!

Way to go Amy! Stay strong and keep going. You can do it!!

AMY! You are the most amazing person. I am actively reading all the blogs and your daily journey. You are an inspiration to all. Your tenacity and will power are relentless. Love ya!
Melody