11:30PM-CDT: In case anyone is wondering, Amy is still on the road and headed for TS#19 at La Veta, CO.  In spite of a hard day, it is RAAM the competitors push on!.  Tentatively the next sleep break for Amy is scheduled in La Veta, CO. (TS#19).  Her race plan is continuously in flux so you never know,. Thus far, she has proved she has been up for it.. That is amazing. GO AMY!


7:45PM-CDT: Amy has reached Time Station #18 at Alamosa, CO!!  And bigger yet she has surpassed the 1000 miles mark! That is incredible!!  Conditions in Alamosa were 69F with south winds at 17mph.  I'm not sure if that is accurate because Amy's crew reported earlier that they were up against a stiff headwind.  It has been a tough 24 hours for Amy and she has been forced to prove her mettle.  Let me be the first to say that I am totally in AWE!  What Amy has done so far is completely beyond comprehension! 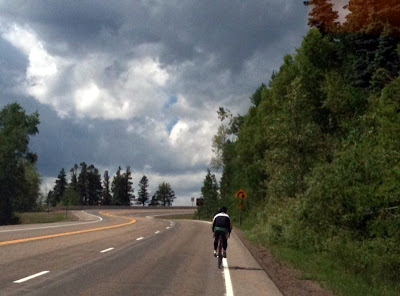 2:50PM-CDT: Amy has cleared Wolf Creek Pass! That is BIG! She has now reached TS#17 at South Fork, CO.  Reports are the cresting the pass was very emotional, there were tears and cheers, clapping and picture taking!  The conditions as she road into South Fork were 68F with Sw winds at 10mph.  As you can tell from the picture, conditions on the pass as she went over were a bit cooler. 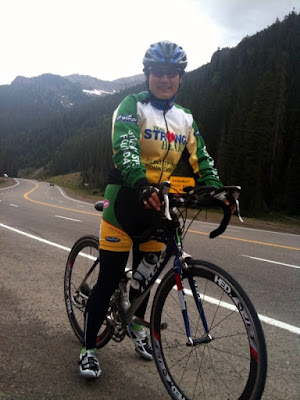 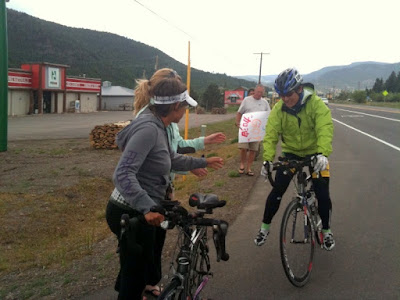 Arrival at TS#17 in South Fork, CO. RAAM 2010
11:30AM-CDT: Just checked in with the crew that is currently in the RV.  It sounds like they are dealing with a few challenges today.  It was cold overnight with temps going down to 39F.  They are having a problem with one of the tires on the van that is following Amy.  Also, Amy is starting to struggle with saddle issues and a sore bottom.  No amount of training can prepare you for how your body will react to so many hours on the bike.  These are the type of challenges that RAAM throws at you that are so hard to prepare for.  Amy does have a top-notch crew and they will do their best to resolve these obstacles.


8:33AM-CDT: Amy has passed through TS#16 at Pagosa Springs, CO.  Temps were 48F and calm when she got there.  Reports have not come in yet but I think the Amy & crew encountered cold temps and rain overnight.  Crewing for Amy overnight was Michelle, Sally, and David. 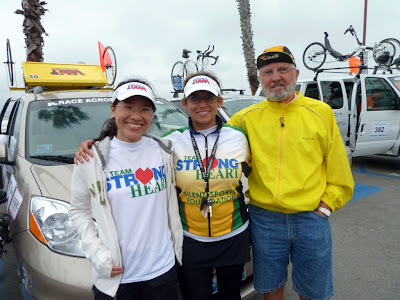 TSH Crew members: Sally, Michelle, & David. RAAM 2010
Wolf Creek Pass now lies ahead of Amy as she goes from Pagosa Springs to South Fork, CO.  The forecast in the area is not in the riders favor either.  South Fork is forecasting scattered rain & isolated thunderstorms, temps in the 50F's, and 10-20mph SE winds with gusts to 45mph.  It is going to be a tough leg for Amy.  Send positive thoughts her way!  Hang in there Amy!
Posted by JayT

Hi Amy and Team, You are all so amazing...just remember ....

When you get to the end of your rope, tie a knot and hang on.

Hi Amy and crew! You are doing super great, you are in my thoughts often.
Jean Jacobsen

Amy,we are all pulling for you! You can do anything with all of us praying for you. Focus on the individual goals and the final prize will be yours. Like mowing the lawn, one row at a time. We are all proud of you! Mark Connell

Go amy go. Lots of us here in San Diego supporting you.
Julie and Trever

Hi Amy, we are all thinking of you and sending tons of love and positive thoughts your way. You are our SUPERSTAR! Stay strong you can do it.

All the best, Amy. My thoughts are with you!

Pain is temp, glory is forever. Hang in there, you are so STRONG@

Go Amy, you rock! We are all so very proud of you!

Hang in there!
The Zane Family

Keep it up Amy! And thank you Jay for the updates!

Way to go Amy! You have made it through some pretty tough climbs we are all very proud of you. We will be keeping you in our thoughts. Keep it up you can do this!

So amazing! Wolf Creek pass is intense while in a car..I can only imagine it on a bike! Way to go Amy - you are a serious RockStar!