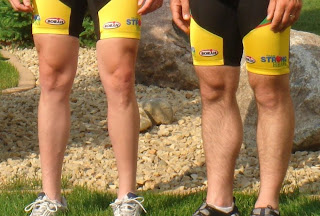 Hello All, Skibby here. As Tess is going to be giving crew reports, I will be posting entry's for the riders themselves. There was a time when I was going to be part of this "epic" journey, but after meeting with RAAM veteran Ben Popp, I realized this wasn't for me. I could also see how badly Neil, who was an alternate at the time, wanted to do this, so I gladly gave up my spot. Good move to, he's a much stronger rider than I am! One thing I noticed in this pic of Bernie and Neil, is that Neil still hasn't shaved his legs! For those of you who aren't familiar with bike racing, most racers shave their legs. There are a myriad of reasons but the main one is that you're showing that you're part of the bike racing clique. With Neil being the independent person he is, refuses to shave his legs. However, I am willing to donate $100 Camp Odayin if he shaves his legs! Any one else willing to do the same?

Last night Bernie and the crew called me while they were traveling through Utah. Bernie, Greg and Tim are all on the RV and expect to arrive in Calif on Sunday. Neil is flying out and will meet them in San Diego. The race doesn't start until Tuesday but there is a lot of prep work that has to get done. First and foremost is getting their bicycles ready for the event. Not only do they have to be mechanically sound but for all of the night-riding that they will be doing, they have to have lights and reflector tape on the bikes. From the sound of Bernies voice, I can just tell how excited he is. He's like a kid on the day before Christmas Eve! Stay tuned as I will be providing daily posts from the riders, giving their perspective on the RAAM and how it is treating them. Remember that the race can be followed at http://www.raceacrossamerica.org/ as well. Go Team Strongheart!
Posted by Skibby

neil is no longer part of team monkey...he shaved his legs...saw it with my own eyes.

I whole-heartedly agree that Neil needs to shave his legs; however, we've donated so much of our money towards this "epic event" that I'm afraid that my encouragement will have to come in the form of peer pressure.

It is confirmed that Neil showed up for the saturday group ride with shaved legs. Admittedly, it was a bad job as he only used the electric but they were shaved just the same!