On the Road to RAAM 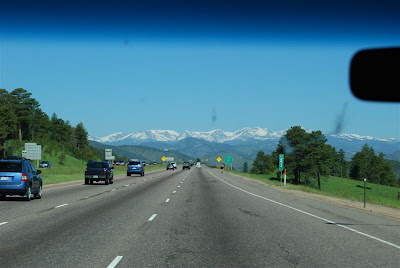 Hello, readers! This is Tess, one of the crew members on this grand, cross-country adventure, and now the designated Head Journalist. (Just a fancy way of saying I'm in charge of updating the blog.)
The story thusfar:
On Thursday evening, Linda, Kristy and I arrived at Bernie's to help with packing and make the Friday morning departure a little easier. (I learned my first important lesson of the trip: Pack light! Do not, however, forget your clothes in Wisconsin...) There was a lot of arranging of Stuff, and debates over what was necessary and where we would put it, and travel plans were discussed with the people driving.
Friday morning went without a hitch; no one needed an alarm to wake up, we were so excited to get on the road, and Bernie made fantastic waffles. The goal was to make it to Boulder, Colorado before parking for the night, with an estimated time of arrival between midnight and three AM.
What followed was ten hours of midwest green and a very pretty sunset -- not terribly thrilling, but the weather was pleasant -- and another six hours of driving in the dark until we found Tim's street.
We managed to fit nine people into one RV for sleeping. If you can avoid it, I would recommend against ever having to do this; just because we could find the space doesn't mean it's a comfortable idea.
Since it was definitely after midnight when we arrived (we were tucking in for bed at 12:45; how we made it there that fast, I'll never know), we hadn't really gotten a good look at the scenery. Waking up, as a result, was a surprisingly pleasant experience. From the street Tim lives on, you can definitely see geological features those of us living in the midwest can only dream about.
We ate breakfast at Panera, which was a new experience for me. (The Egg Soufflé with spinach and artichoke hearts? Delicious.) Once we were fed, and the gas tanks on the vehicles were filled, we set off again, now with ten of our fourteen team members.
As I write this, it's 5:32 PM local time. We've traveled through the mountains, and we're somewhere in Utah. We spent about an hour or two stuck in traffic due to a car accident (engine fire? Definitely involved fire, and a big charred spot on the ground) in the mountains in Colorado. We made the best of it by starting a little dance party along the side of the road. Kristy and Linda and I did a little T'ai Chi. We all observed that, if we had to get stuck in traffic anywhere, we'd probably picked the best place for it.
When the accident was finally cleared, Bernie let off a little steam by honking in the tunnel through the mountain, which started a chain reaction of people honking their horns in the tunnel just for the joy of it.
While many members of the team will riot before having to drive through Iowa and Nebraska again, we all fell in love with the geological features we've been seeing from Boulder until now. Even in the more arid terrain, it's gorgeous.
So. From wherever we are in Utah, the last I heard was that we're heading towards Las Vegas, Nevada, and then towards San Diego/Oceanside, California. I'm hazarding a guess that it will be at least eight hours before we arrive. In spite of how much time we've spent in cars over the last 36 hours, I would say we're all still playing nicely with each other. Bernie's said it before, and I happily reiterate: We have an excellent group on this trip. I'm so glad to be here.
~Tess

Big thanks to Bill our Crew Chief for setting up WIFI in the RV! Coast to coast, rolling connectivity!
Posted by B Train

you guys and gals simply amaze me. Bernie and Neil - you will be missed and prayed for. The group rides wont be the same until you come home. Be safe - kick butt and ride on. Have a great week and I love the pics!

Hello, Crew and Riders! Bernie's wife, Laurel, here! Last night, I had enormous difficulty trying to figure out how to post a comment on the pictures, but the "Add a comment" words have no link. As a virginal blogger, I ended up leaving without a message until now.
First, let me say that I'm thrilled that you're all alive! Just like Camp Odayin, they post pictures on their site of each of the campers to reassure the worried parents at home that each child is still alive. I'm thankful to see my husband saying, "Yay" as he waits on I-70...something that we've done many-a-time before now. Usually, it's due to a rock slide or snow closure (remember sleeping in a round booth in a hotel restaurant that night, honey?).
I keep praying for your safety and for your "happie thawts" so that you can fly across the country (like the Peter Pan reference). Interesting, last night was the first night in two weeks that I slept through, didn't have a nightmare, and didn't wake up with my heart pounding. (This RAAM effects the family more than you'll ever know).
Neil...since you're on Team A with Bernie, I'm afraid that you're going to have to take over my job at night and scratch his back. Otherwise, he can't seem to get to sleep...if he CAN sleep without you doing it, then I guess my job is done at home, right honey?
LOLing and looking forward to seeing you all tomorrow morning.
Loving wife, Laurel

It's Pam Nelson, friend of Neil and Belinda Eerdmans. I am here to support Belinda if she'll let me while Neil is gone. I am really enjoying the journal writing and pictures. The photos of CO made me want to jump in my Toyota Prius and take off for the mountains! I'll keep checking in. Have a good ride. Get your rest!

Oh, I see! So, Neil's "special". Feels he's "better" than the others by NOT shaving his legs. Thinks that he'll NEVER fall down and need to have gravel dug out of his skin.
My advice: DEEP dry massages from now on!

My pledge of $100 is on its way to see that a certain team member (no names please) shaves his legs...Neil! My advice as a pro cyclist was simple: "If you're going to be pro, you have to LOOK like a pro." Billy Crystal couldn't have said it better, "It's better to look good, than to feel good."
Besides, think of all that wind resistance on Neil's legs! Over the course of the ride, imagine all that valuable lost time and extra effort! You know, UPS doesn't wash their trucks every night because it makes them look pretty.

Bernie's neighbors, the Sullivan's here, wishing you all a very safe ride tomorrow and know that we are following you as you go. We'll keep you in our thoughts and prayers for your safety. The blog is fun to read to hear what you guys are up to and the photo's are great. Thanks for sharing and happy riding!