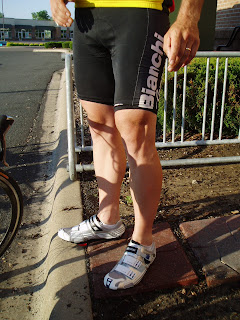 Unbeknown to me, Neil aka "American Flyer", shaved his legs before he left Minneapolis. They look smooth, and much faster! (Thanks to Jay Thompson, Velogeek for the pic)

Here's some more exciting news. The guys are going to be guest "diarists" on www.cyclingnews.com. For cyclists this is the pinnacle website of cycling. Us addicts usually check out cyclingnews.com at least 3-4 times a day. Now the boys are going to be famous! When I talked to them yesterday they were busy prepping for the big show. They were doing interviews, getting pictures taken, basically living the rock star life. Bernie said that they had gotten in a good night's rest the night before. They hadn't ridden their bikes much since leaving Minnesota, but were hoping to get in a spin yesterday to check out the equipment and get rid of some nervousness. There's already been one area of concern, Neil was losing his voice and had a chest cold, his wife convinced him to get checked before he left, and he was diagnosed with bronchitis! He's on anti-biotics, hopefully he heals quickly. The Dr. reminded him that "your wife is always right"! How true!

They depart today at 4:00 PM CST or 2:00 PM PST, so after a year of planning and training it's almost go time!
Posted by Skibby

i like the shoes! and so smoooooooooth are those legs...super fast. dont worry Bernie - your legs are nice too.