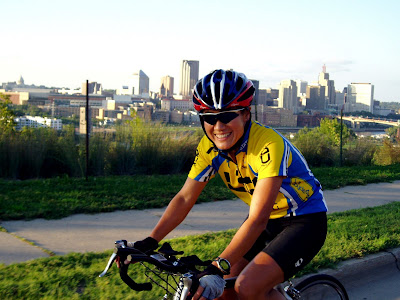 Amy Xu has announced that she is forming a 4 person mixed team to race in the 2008 Race Across America and is racing under the name Team Strong Heart Forever. During our preparation, race and after, Amy has really been on fire with immense drive and passion!

During an interview in August, Amy said:

"I officially signed up the 2008 Race Across AMerica (RAAM), a 4-rider team, TEAM STRONG HEART Forever, on August 5, 2007. I had this desire starting from back in April 2007. I have been very fortunate to follow the news and progress of the 2007 RAAM and the members of the TSH, Bernie, Neil, Tim, and Greg. They have been inspirational and continue to help the 2008 TSH's preparation.

Currently we are in a preliminary planning phase, e.g. forming a team, preliminary talking with sponsors, gathering more information, etc.

The TEAM STRONG HEART Forever mission is to make this event last as long as the RAAM lasts or forever while raising awareness of CAMP ODAYIN as well as honoring individuals' passion for Silent Sports and team work for a life-time journey. The 2008 TSH Forever's goal is to form a 4-person team (mix) with 2-3 alternates and a crew of 10-12.

I am very grateful to have the 2007 RAAM TSH members' share their energy, experience, and provide their support. I also want to thank clubs and members, particularly from Loons State Cyclists, to support the 2008 TSH Forever team in this venture."

Keep 'em spinning Amy! We're pulling for you!
Posted by B Train

Hey Amy! We are proud of you and ready to support you in RAAM.
Larry and Pam Sayler
Trailhead Cycling and Fitness
www.trailheadcyclingandfitness.com