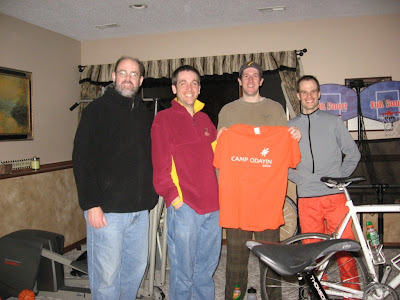 If practice makes perfect, then Neil and I just made a solid installment for the RAAM! Most of us have had a lot of experience with 24 hour mountain bike racing but nothing like it on the road side.

Since it's a little cold outside here in Minnesota this time of year, most of us get the majority of our training indoors (basements, bike shops and healthclubs) when the temps get into the single digits and below zero. Normally, that's not much of a problem unless you're training for the RAAM. So when we wanted to do a 24 hour RAAM team race simulation in order to get a feel for the schedule and how our bodies would react, we had one option which became the 24 Hours of Bernie's Basement!

If we had a nickle for every shaken head or bewildered look when describing the event, we'd be well beyond our $100,000 goal for Camp Odayin! Jay T. gave us a great laugh with his posting at the Trailhead Backdoor Blog. Thanks man!

The best part of the 24 Hours of BB was that our crew cheif, Bill Nicholson, joined us for most of the event and John Rotach joined us for the final 6 hour shift. Having their company and support was awesome!

Neil and I started out at 10pm for a 6 hour shift taking 30 minute ride and 30 minute rest intervals like we will likely do during the RAAM. We kept our intensity at around Anaerobic Threshold which is hard but sustainable. After the 6 hour shift we rested/slept for 6 hours (as we would during the race when Greg and Tim would take their turn). We kicked things off again from 10am to 1pm, rested from 1pm to 4pm and then finished the 24 hours with a 6 hour shift from 4pm to 10pm.

We celebrated the finish with surprise hamburgers that Laurel picked up, a couple of burritos and some hearty Belgian beer that Neil brought as a "just reward"!

Thanks everyone!!!
Posted by B Train

I didn't feel as bad as I look!

Your wife must be a saint!