On a training ride this weekend I was captured by John Monaghan of the New Hampshire State Police. Here is his account of what happened, in an email he sent to Hammer Nutrition: 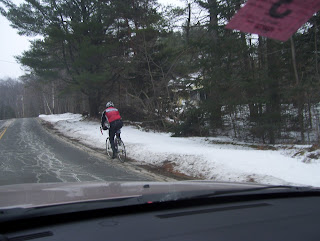 I was out on patrol working my day job as a NH State Trooper when I came upon a rider on Route 118 in Dorchester, which is a bastard to climb no matter what time of year. On this day (today January 7th 2011) it was a blustery 21 degrees out with snow flurries. I snapped a few photos of this guy wearing his hammer top as he rode. I waited for him at the junction of RT 25. He stopped and told me he is Brett Walker from Salisbury NH. He was on a four hour ride in preparation for RAAM 2011. Wishing you all the best in 2011. Brett said it was alright if you wanted to use these by the way.
Yours ,
John Monaghan 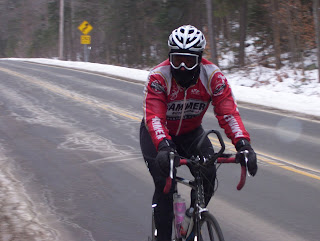 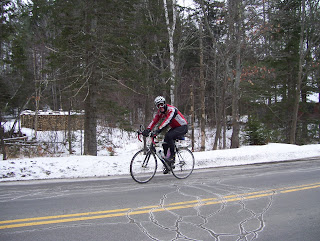 How do we "really" know this is who you say it is? The perpetrator is well disguised!

You made us Minnesotan Strong Hearts proud!!! We root for you. Be safe out there. You may want to have the State Trooper on your crew for the B.I.T. type of RAAM training!!!