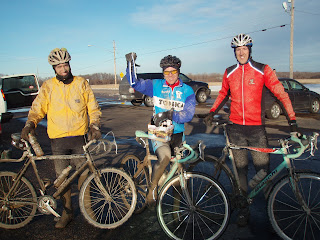 Wild ride yesterday and fulfillment of a dream of mine that I have had for some time. I am a pro cycling fan and love to watch old films of races over and over again. In fact, my wife will say, "oh, It is Phil again." Referring to Phil Ligget's voice that is on everyone of my tapes and DVDs. After watching these races enough I wanted to experience the mud and grit of the Paris-Roubaix for myself. I did yesterday on my three speed mountain bike.

The electronic age has its good and bad points like everything else but one of the greatest points is having mailing lists where you can reach 100 people in one shot. I have finally found a group of people crazy enough to try just about anything on a bike. It also has provided a way for me to meet some of the neatest people that I would have never met or kept in contact without e mail. The race that I cherished so much yesterday would have never happened! The potential of the electronic age is limitless on so many levels! To check out coverage of this crazy event go to... http://thbackdoor.blogspot.com/

The route started and finished in Fletcher, MN and consisted of 4 laps on a 10 mile, 50/50 mix of dirt and paved roads. The dirt was mainly ice, snow and mud. 6 brave souls showed up (Neil, Bernie, Skibby, Dan, Tom and Mike) with Dan earning a solo victory after he attacked on a particularly treacherous part of the course. He graciously donated the $10 prize money to Team Strongheart. All proceeds for Team Strongheart benefit Camp Odayin, a camp for kids with heart disease.
Posted by B Train